Tonight is New Year's Eve, so I figured I would do my final post for the year.   We normaly play games and have snacks and shrimp on New Years so I am just waiting for my sister and niece to come over :)   My Daughter and her friend are upstairs and ready,  I feel bad for my son he has to work early tomorrow morning so he will be in bed early.

We got my Dad a power lift chair for Christmas.  He has been having trouble getting out of his recliner.  I don't think he likes it to much it doesn't rock and the head of it is back kinda of far.  We still have 5 more days to decide if he wants to keep it.  Then we have to decide which chair to get rid of his old recliner or an old pink chair.  I am almost in agreement with Dad and my daughter that we just trash everything and buy a new couch and another chair.  Ours is really old.   Christmas this year was very quiet and I really didn't give me son a lot.  I did give him a shirt with a dinosaur and a pun on it that he really liked :).  My sister didn't feel good, and I was tired not sure why I was so tired.  The past few days I have been lazy not wanting to do anything.  The only thing I did was wash.

My daughter would like to get a cat or a lizard they say they are good for depression and anxiety, my father is saying no more pets.  I hope I can convince him to get a cat but with my daughters allergiers I don't think he is going to let us.  So then I have to work on a lizard of some sort (I am not looking forward to it because when my daughter isn't doing well then I have to take care of the pets, and a lizard I don't think I could feed it live food) :( I am hoping next year she makes more progress then this year with her anxiety and depression.  This year there were a lot of better days then last year, so I am hoping next year she have even more better days.

Not really doing a New Year's resolution but two of my goals (and they are silly) is to go through all of the bags that I have paperwork (and old mail) and get rid of a lot of it, also I would like to copy all of my cd's onto the pc and then onto an external drive so I can listen to my music at work.

Below is an update for the drama's I have been watching.  It seems like I watched a lot but most of it was the past few days after the holiday!
Kdrama
Love Alert (Flutter Warning) Completed I did enjoy this drama but it felt like the drama dragged out a lot in the middle.  The beginning was good and I enjoyed the last two episodes but the middle really did just seem to drag.  I usually don't complain about them having actors cry so much but Yoo Eun Hye seemed like from the middle to almost the end all she did was cry.  The scene where it would of been a big impact with the manager wasn't as big since she had already been crying through half of the previous scene's.  Also it seemed that they had the actor/actress mainly sitting/standing/laying around not really doing anything while the background music played.  I enjoy it when it happens sometimes in the drama's but in this drama it just felt like they did it in alot of episodes and it would last to long.  With that being said I really did like the first few episodes and the last two it just seems the middle of the drama was to slow with nothing really happening.

Feel Good To Die - Completed Enjoyed this drama towards the end it had a few twists and turns that I did not see coming, which made if even more fun to watch.   I marathoned the last 8 episodes this weekend because I wanted to know what would happen next and how it was going to end.  This was a very enjoyable drama to watch. 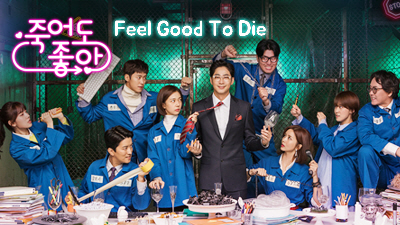 My Healing Love Episode 25 – 44  We have now found out who her parents are, and they have found their missing daughter or so we think.   This is one of those long weekend drama's and I am not sure if there could be another twist and turn in the storyline.  I like the lead actress and the older male in the other family together they are fun to watch, and I am so enjoying the youngest sister in the one family and the main lead actress younger brother being together.  He is so awkward but so straightforward, they are really cute she ends up just smiling and laughing around him.  I really hope they keep them together and don't do anything to them.

My Strange Hero Episodes 1 -4 - Starring Yoo Seung Ho (as Kang Bok Su), Jo Bo Ah (as Son Soo Jeong) and Kwak Dong Yeon (as Oh Se Ho).  These three went to high school together and Kang Bok Su gets kicked out of high school.  They are now adults and they are trying to get Kang Bok Su to go back to High School where Son Soo Jeong is a teacher and Kwak Dong Yeon is somehow involved in the school.  I started to watch this because I love Yoo Seung Ho acting, and so far this has been enjoyable.  I also realize Kwak Dong Yeon does good playing a not so nice character.

Clean with a Passion for Now Episodes 1 -7 This drama is starring Yoon Gyun Sang (as Jang Sun-Gyeol), Kim You Jung (as Gil O-Sol), and Song Jae Rim (as Choi Gun).  Jang Sun Gyeol owns a cleaning company and he has a fear of Germs.  Gil-O Sol who is very messy, and doesn't wash her hair or take a lot showers encounters Jang Sung Gyeol and ends up working for him.   Kim You Jung is so adorable I love her.  When she smiles I smile.  This also stars Kim Won Hae has her father and I have loved his acting in everything I have seen him in.  I have been enjoying this drama and look forward to the next episodes :)

I did watch one episode of Fate and Furies, Just Dance and Coffee do me a favor. Not sure if I will pick them back up or not.  I will have to see.

Chinese drama
A Love So Beautiful - Chinese Drama - Completed this was a cute drama.   Some of it had the feel of Itzumi No Kiss but I think the male character was more awkward then arrogant. I also enjoyed how it went from their High School years, to College to them being young adults.  I also enjoyed the friends and the friendship they all shared. 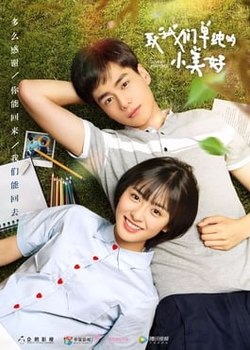 Highlight - Yoseob and Gikwang will be leaving in January to do their service,  Btob I believe Changsub will also be going in January.   I know there is more but it makes me sad to see them all go.  Today I was listening to CNBLUE and I know they have only been gone a few months I already miss them.

Pentagon not sure if I said anything about them but I love Shine, I'm always almost a year behind on watching the music shows and in 2017 they did Like this that I also loved!

Well that's all for now.  I almost made my goal of doing one post a month I missed one month this year.  That is going to be one of my other goals is to post at least once a month :)